Here some photos of the conference. Please click below.

END_OF_DOCUMENT_TOKEN_TO_BE_REPLACED

We concluded our first event, a workshop with guests from Austria: Paul Pioberger from the Institut für Konfliktorschung and Ede Kovács, political expert on European issues. . They both gave presentations, the outline of these will be communicated here. We also had some bright young to-be research fellows from the Eötvös Loránd and the Corvinus University, Budapest. We discussed the security problems of Europe, the problem of radicalism. János Széky, a journalist from Budapest talked about the Hungarian political scene.  It was a small-scale mission, a pilot project with some experience to be learnt. 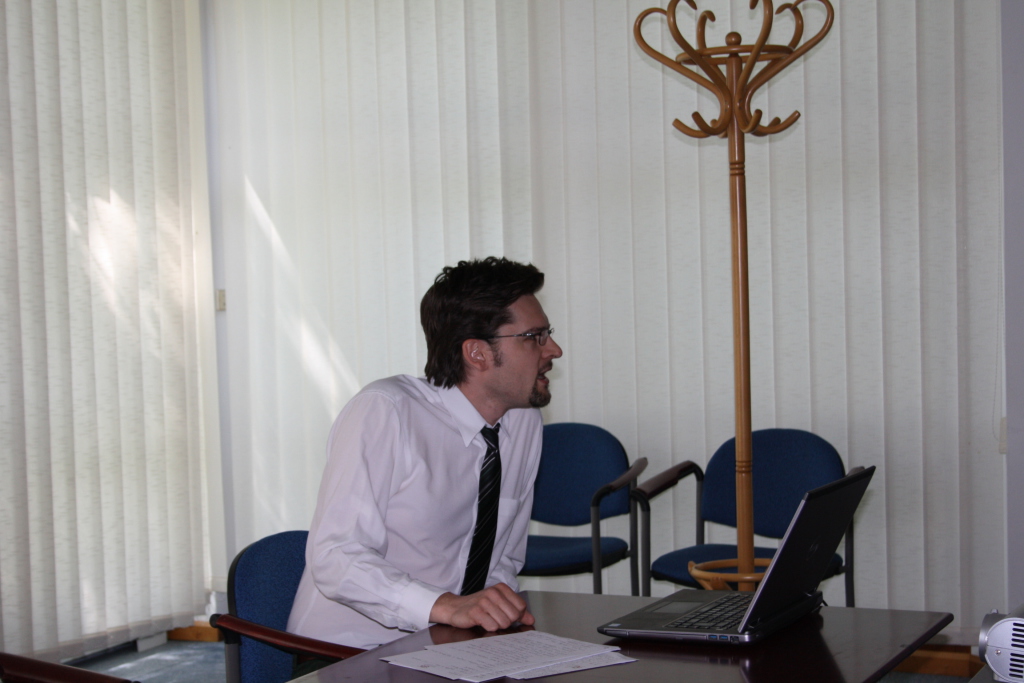 We had a fantastic funtion in Club Tihany today. Back tomorrow. 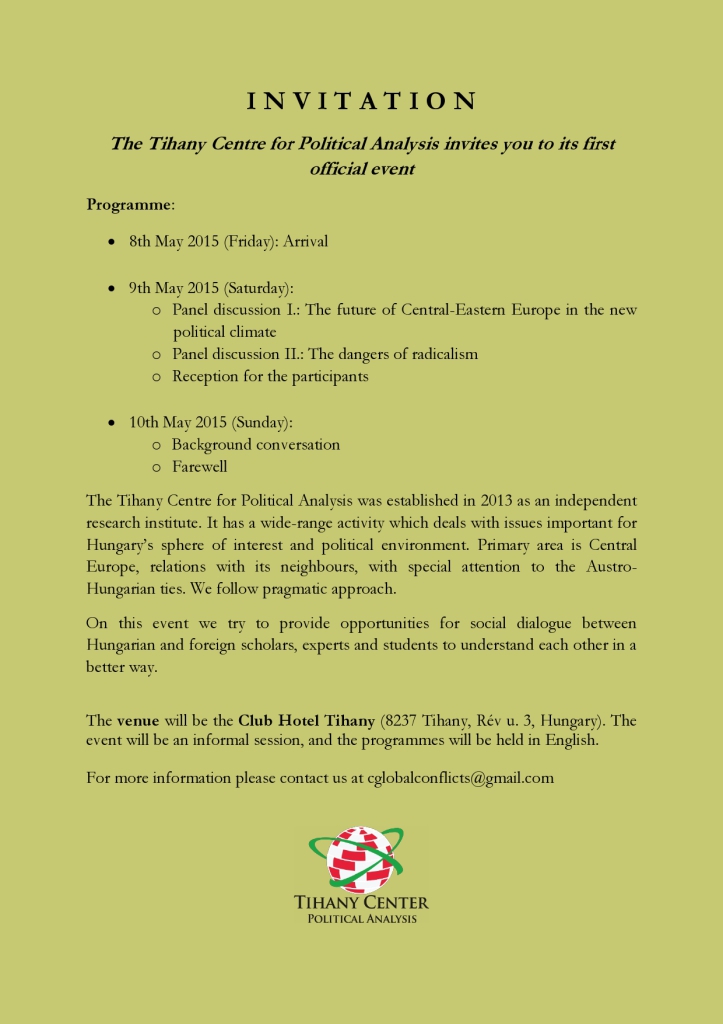 The future of the Visegrad Group depends on its ability to function effectively within the Euro-Atlantic structures and on its will to act as a regional political rather than a mere geographical unit. The main factor which influences the Visegrad cooperation in a negative way is the preference of member states’ foreign policy and interests at the expense of the policies and interests of the Visegrad group and the bilateral relations as well as current political affiliation of the governments in particular Member States.

The Visegrad Group is a regional association lacking an institutional base. The cooperation is based on rotating leadership and regular meetings of the representatives of the four members on different levels. Only the International Visegrad Fund, quoted above, has formal headquarters in Bratislava. In order to strengthen the Group institutionally, it is necessary to create a framework which must be in compliance with the goals of the Group. In my opinion, political representation of Visegrad countries will remain an obstacle to effective regional cooperation within the Visegrad Group.

With regards to the question of further institutionalization of the V4, member states have found consensus because this issue is no longer of importance nowadays. On the other hand, establishing a mechanism requiring adherence to rules and treaties could lead to a rise in Visegrad cooperation’s credibility.

Despite the declarative statements about the necessity of further cooperation, the Visegrad Declaration of 2004 has not set priorities comparable with integration into the European Union and NATO. The realization of set priorities is also characterized by insufficiency. Despite the willingness to coordinate approaches and activities, particular countries prefer to take individual steps.

The enlargement of the Visegrad Group by South- and South-East European countries was relevant in the period of revitalized Visegrad cooperation. The most suitable candidates were Austria and Slovenia, but, nevertheless, consensus on this issue has been never achieved. The open “Visegrad plus” format is to be used for cooperation with other countries or regional groups such as Ukraine, Slovenia, Austria.

In spite of all existing problems, Visegrad cooperation represents the most effective form of regional cooperation in Central Europe. Slovakia as well as other Visegrad countries is a member of two other regional groupings – Central European Initiative and Regional partnership led by Austria. Due to this fact it is necessary to clarify or divide tasks and roles between these three regional organizations.

Nowadays, the Visegrad Group has to deal with both the definition of new strategic interests and key priorities and the challenge of their practical implementation and application.

What we have to do is to study the Nordic way.

This is probably the most important question of all. We have to know this problem before we talk about the war with Russia. Ukraine’s new government has said it needs $35bn (£21bn) to pay its bills over the next two years, which the new loans should mostly cover. It owes the Russian gas company Gazprom $1.9bn.

The Ukrainian economy shrank 0.3% in 2013, the IMF estimates. And the months of street protests, when the barricades were up on the streets of the capital, Kiev, will also have had an effect.

The new government has also accused ousted President Viktor Yanukovych and his government of stripping billions from state coffers. The currency, the hryvnia, lost nearly a fifth of its value in February alone. It now stands at 11 to the US dollar, down from eight in January. The economy is struggling to recover from a recession and has been shaken by capital flight, as worried investors move their money abroad. Efforts to prop up the hryvnia have also depleted foreign currency reserves.

What difference will international aid make?

A few months ago, a $15bn rescue package from Russia looked likely. But that was before street protests led to the removal of President Viktor Yanukovych, Moscow’s man.

Now the IMF and other international donors are stumping up a total of $32.1bn, reducing the risk that Ukraine will default on its debts. But the loan is dependent on strict economic reforms, including raising taxes and energy prices. The government has already raised gas prices by 50% in an effort to secure the bailout. It has also agreed to freeze the minimum wage. And Ukraine has a chequered history with the IMF: it failed to keep to the terms of previous assistance packages in 2008 and 2010.

The IMF estimates that the Ukrainian economy shrank 0.3% last year after barely growing in 2012.

Ukraine has a lot of coal mining, especially around the eastern city of Donetsk, as well as ageing heavy industry including shipbuilding, steel and arms. However, because many industries are so energy-inefficient, they are highly dependent on imports of Russian gas, which have been heavily subsidised.

Ukraine has more arable land than any other European country and is a major producer of grain and sunflower oil. Wheat prices have risen 20% on world markets, partly because of the fear of instability in Ukraine.

And then there is the shadow economy: everything from cash-in-hand labour to corruption to illegal activities. A 2012 study by two Ukrainian academics reckons the shadow economy is equivalent to 44% of Ukraine’s economic output. In 2013, Ukraine was ranked 144 out of 177 in Transparency International’s Corruption Perceptions Index.

Business and politics are deeply intertwined: Ukraine’s richest man, Rinat Akhmetov was until recently an MP and a supporter of ex-President Yanukovych. His companies have received an important share of state tenders.

Responsibilty of the government

Before the latest household gas price rise, consumers paid only a quarter of the cost of imported gas. The price increase was one of the conditions demanded by the IMF, but it was an unpopular measure that President Yanukovych refused to take. As well as the minimum wage freeze, taxes will go up and 10% of civil servants will be made redundant. There are also plans to cut corruption and red tape. And the IMF wants the hryvnia to float more freely against the dollar.

The dispute with Russia has already cost Ukraine the Crimea region. It also means higher energy prices. In return for the lease of the naval base at Sevastopol for the Black Sea fleet, Russia agreed to subsidise energy exports to Ukraine. Now Crimea has been annexed by Russia and the Russian state-controlled producer Gazprom is ending Ukraine’s one-third discount. However, the loss of Crimea at least takes it off the books of the government in Kiev, which was paying for about two-thirds of its budget. The government in Kiev says if Russia goes ahead with trade restrictions, those could lower economic growth by up to 1%.

The problem of the EU is more complicated than we would first think. It is not security, not immigration but the euro itself. The euro meant a single interest rate and a single exchange rate. The interest rate was too low for some countries, such as Ireland and Spain, which were growing fast. It was too high for countries such as Germany and France, which were growing less quickly. On the fringe, low interest rates encouraged property speculation and led to conditions in which inflation was higher than at the core.

Before the creation of the euro, these countries would have let their currencies fall to compensate. That was now impossible, so they became less competitive at a time when Germany was busy making itself more competitive. For a decade, German workers took below-inflation wage increases to price their goods back into European markets. This was highly successful, up to a point. Germany’s trade surplus soared, but the flipside was that trade deficits in countries such as Spain, Greece and Italy worsened.

In the years before the crash, the system was kept going because Germany exported capital to the countries on the periphery to allow them to buy German goods. Then came the crisis. Germany insisted that if countries were in trouble, it was because they had lived beyond their means. This was a bit rich, given that Germany had been complicit in allowing them to do so.

Berlin said it would help, but only on its own terms, which involved every country replicating Germany by squeezing domestic demand and promoting exports to become more competitive. This was clearly a logical impossibility since one country’s surplus is another country’s deficit. Countries could not become more competitive through devaluation, so they had to do so by austerity, cutting wages and public spending aggressively. At Germany’s insistence, there was no austerity for the banks.

Europe’s leaders consider the euro too big to fail. They are wrong. It is already failing. It is failing to deliver the promised economic prosperity and it is failing to bring Europe together politically. Greece seems to bring down Europe, the recent talks in Brussels did not solve the problem, and did not bring the solution nearer. Europe would like to save Greece but can it save itself?